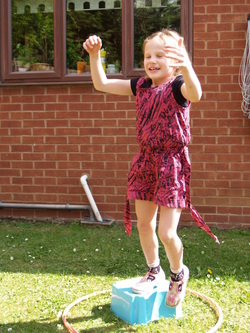 Ella is always asking to play CliMAX-rules in our garden.  I am pleased to accommodate this as I can see how she is learning to catch, to throw and to explore BIG numbers.

Have you noticed when a young child is asked a few challenging questions they deflect attention from themselves and ask you something like, “What’s a billion add a 17 million take a zillion dillion….?”  The question is ridiculous or impossible and you may, like me, sound frustrated whatever way you find to answer them.   But what it shows is that young children are intrigued and impressed by big numbers even when they don’t really understand them.

Am I right in thinking that teaching focuses on small numbers; 1 to 10 initially and then up to 20 and may be going on to 100 as the child gets older?   Well I had to accelerate the process with Ella and try to explain 100 as 10 groups of 10, then a 1000 as 10 groups of 100 and so on.  You should have seen the excitement in her eyes when we first reached one million!

With some sort of appreciation of big numbers Ella could then experience the thrill of CliMAX-rules as we combined them with a catching game.  CliMAX acknowledges something we do well with a point and something that demands a high skill level with a MAXimum, but when we get it wrong or fail we lose everything and our score goes to zero.  Yes, that bit sticks in the throat a bit, as I am preconditioned only to give positive feedback for fear of discouraging or, worse still, upsetting my offspring.  But with CliMAX-rules you have a set number of opportunities for the chosen task, and so there is usually a chance to start re-building your score.  Of course, MAXimums are the rewards Ella loves; her score leaps up 10 and then if she does it again at the next opportunity, by 100.  If the higher skill is achieved again she gains 1000 and so on -10,000….100,000….1,000,000.  Can you believe this? She gained a trillion (1,000,000,000,000) from one catch the other day.  I’m not sure if the celebratory screams were loudest or the groans that came next when she dropped one! 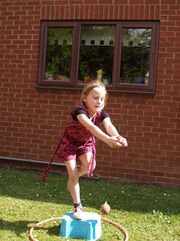 So what sort of skill is Ella being tested on when we play CliMAX-rules?   Well we started with catching.  Catch a ball and get a point.  Drop the ball and lose all your points.  Catch the ball when standing on one leg and gain a MAXimum.  Then Ella had to remain standing on a small box whilst she caught a ball.  In subsequent games we award a MAXimum if Ella caught in one hand (a bit too tricky that as she only has little hands).  Later we had her attempting to catch while stepping into a hoop and MAXimum was achieved if she started outside but caught the ball inside the hoop and remained inside without stepping out. 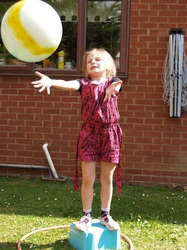 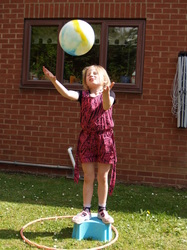 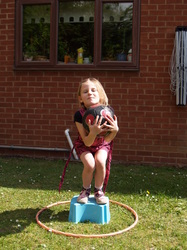 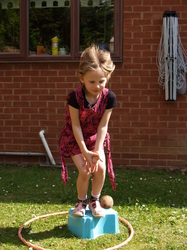 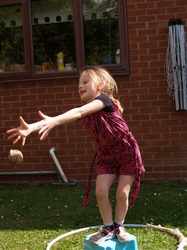 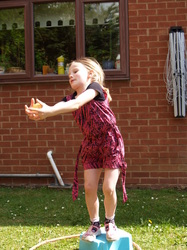 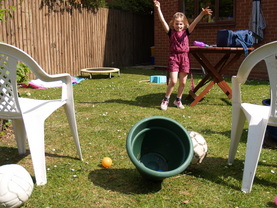 We have also started using CliMAX-rules with throwing:  One point for throwing a ball through a large target and a MAXimum for hitting a smaller target.  Now you could adapt this for hitting a golf ball, kicking football, serving a tennis ball or bowling a cricket ball.  The child can just compete against themselves, trying to beat their previous best final score, or you could bring in an opponent, though be prepared for tears when one of them loses! 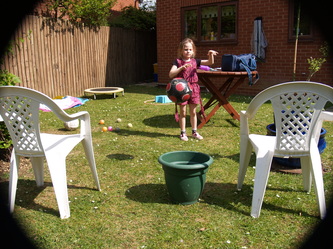 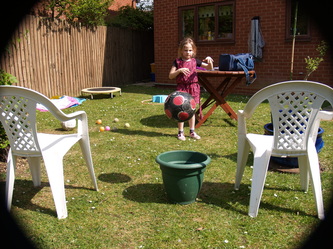 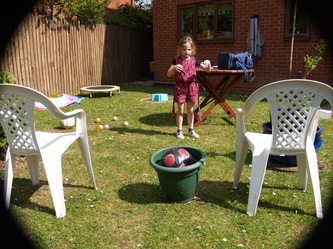 Writing down the scores can also be instructive.  Ella has begun to recognise that when another MAXimum is scored all you have to do is ‘drop in a one’ in front of the preceding score.  Hence the score 14, becomes 114 for the second MAXimum and 1,114 for the third, etc.  In some ways this is easier to see and even write than it is to say.   It is a little more complicated if this is not the first MAX sequence, e.g.  if the score had reached 11,114 and then after two single points and a MAXimum another MAXimum is gained, the score would go from 11,126 to 11,226.  Another MAXimum in this sequence would bring the score to 12,226 and I think Ella will get a better idea of the pattern when we use the flip numbers of a cricket scoreboard. 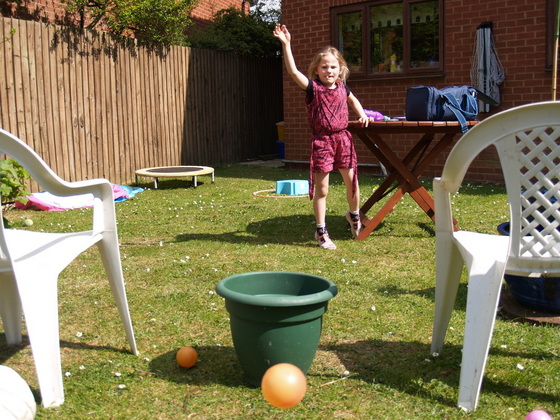 Not in, but over. One point only.
I am delighted that CliMAX not only provides peak excitement for cricket lovers, but is helping my precious daughter to develop her throwing and catching skills and expanding her grasp of the mathematics of BIG numbers at an earlier age than I ever dreamt was possible.  Try it with your children.