This is the story of a crib inspired by the St James Church Chipping Campden Crib festival.  It was made from medical equipment and medicine packets and challenges us all to consider what would happen if Jesus had not been born 2000 years ago, but instead is .............

Chapter 7
Two thousand and fourteen years ago a grey bearded man, famed for his ability to tell a good story, sat surrounded by children who gazed up in wonder as he continued his tale: 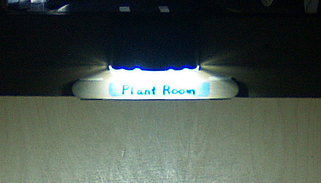 May Ray became aware of the snow settling in her hair and the cold melting snow trickling over her face and down her neck and under her clothes.  She shivered.  Joe then notice they were standing next to a door that had been left ajar and inside a light was on.  There were a few inches of path around this door that were wet but not covered in snow.  A humming noise was coming from within the room.  Joe pulled back the door and saw large tanks and pipes crowed around the back wall of this building. A warm breeze of air washed over his face for a moment.  “Look, May, its warm in here.  Let’s wait here until the snow eases.”  May read the sign above the door - ‘Plant Room’ - and was expecting some greenery, flowers or little bushes, but this was better.  It was really warm and though the walls were not painted, nor the floor tiled it was spacious and tidy.

Scared, May tried to smile at Joe.  Joe faked a smile back.  “I can’t go back there, Joe.  Nobody will believe me about the baby.”    Joe was silent and May began to tell him how she was visited as though in a dream.  Not by somebody of this world, but somebody more formidable, somebody mysterious, somebody with a glow that could reassure you even when you were petrified.  That somebody had told her she would have a baby and no man would be its father.  As Joe’s jaw dropped, May quickly added, “I could not argue with him, Joe.  I did not understand, but he made me believe.”

Joe saw May was glowing and he knew she told the truth.  His previous presumptions disappeared, like the snow disappearing from May’s hair and he was now filled with respect for her.  They both realised that what would happen next was inevitable and not in their hands.  With this thought they felt calmed and strengthened.


A few sheets, oil stained, were found, and the couple established a base in this plant room.  The pains that came on May were no longer frightening, though they were fierce.  Each one made the couple think they were closing in on something special and after each they would exhale fully and then laugh together.